Exam week is coming up and instead of preparing, I’m procrastinating. 🙂 I only have two major ones anyway.  If I wasn’t procrastinating, I wouldn’t have come across a certain article from TechCrunch.

You all remember Facebook’s privacy issues right? The one’s that have been so numerous that there were tons of articles about them. Facebook has had so many issues that Wikipedia has a whole article about it. Don’t get me wrong, I think Facebook’s a good idea but it has problems. 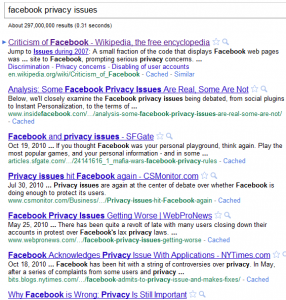 The top articles for this search

Anyway, when I was browsing TechCrunch, I came across a headline that said “Facebook Sued For Having Privacy Controls In Place. Yes, Seriously.” Wait…..what?  Did I read that right?  Who would sue Facebook for having privacy controls? This is ridiculous. So, I click on the link.  Turns out it’s a patent lawsuit. What? Apparently Walker Digital, an invention company, patented the process of how users control and manage the release of information. Someone patented this? You can do that? Apparently, you can.  The company claims that Facebook violated it’s patent by allowing people to have some control over their privacy. You have got to be kidding me…..I think this is real because Facebook said that they would fight it…..I’m hoping that it’s a joke though. I would still be wary of putting anything that you consider personal/valuable on Facebook though.

As long as we’re on the subject of Facebook, does the interface look cluttered to you all? (On a side note, Twitter looks cluttered to me too.) Look at it, really look at it. Doesn’t it look kinda dull? The Washington Post agrees with me on this. This is the only reason I like Twitter marginally better than Facebook.(I don’t like either of them that much) Twitter lets its users control how their page looks. With Facebook if you don’t like it, you can’t change it. I am a (somewhat) visual person. I don’t like white all that much and I don’t like seeing too much stuff on a page either.  What I would like in a social networking site, is for it to be customizable. I want to be able to change the background, limit the number of things on a page and be able to organize it all.  The two major ones don’t really let you do that.

So what do you all think about the aesthetics of Facebook?

« Lessons from Arnold Schwarzenegger: The Mental Game is Key to Success
Does the Better Business Bureau Sell Its Grades? »

Leave a Reply to Shashi Bellamkonda