Disaster? Social Media can help save the day! 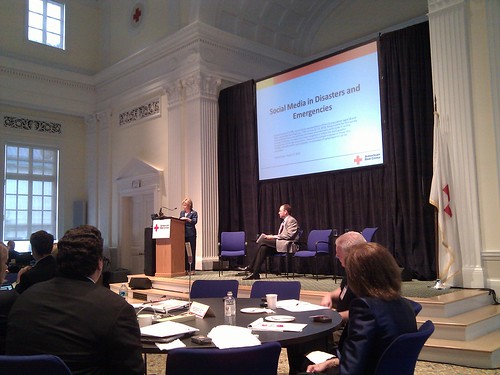 Taken by Shashi Bellamkonda(yes there is a relation)

Everyone in the DC area remembers yesterday right….of course you do! Who could forget hearing, seeing or being in the flood that covered Rock Creek! (For those of you who have been living under rocks to get away from climate change or in the Denver area, you can read about it here) My father(most of you know who he is) and I were on our way to the Emergency Social Data Summit(hands up if you were there or following along on some social media website….*sees tons of hands*….good, good!) hosted by the American Red Cross when we heard that Canal Road was closed near Arizona Avenue(see map). Immediately(and he was driving by the way….the rest of you don’t text and drive!…thank you) he sent out a tweet(it wasn’t spelled properly, but it was understandable) saying that Canal Road was blocked, then later he got a reply thanking him for the help.

The conference focused on how to use social media(Twitter, Facebook, Google, Skype…etc) in times of crises and  to try and come up with a way to filter the information, get it back out into the social media network, and get it to the professionals .  There are about 6 million people using Twitter, more than 5 million use Facebook and almost everyone uses Google. That’s more information than there is water on Earth! And like water, the sheer volume is overwhelming, especially if a disaster happens. That makes it harder for the professionals(firefighters, police, medical personnel…anyone who is trained for disaster situations) to determine what information is the most relevant, needs immediate attention, can be acted on a little later…ect.

The case study most often referenced was the earthquake in Haiti. After the quake, there were texts, and tweets coming in from all over Haiti about people who needed help and where they were. Those texts and tweets got picked up by other social networks and spread all over the internet. However, many of those pieces of information were not verified and rescue crews who were following the information often went to the same place twice because there was no follow up saying that “yes, this problem has been taken care of”.

After hearing many speakers(the event was streamed live; sorry I have no idea what the weird diagram is on the right),  every table participated in a ’round table’ discussion. This was where many of the ideas about how to connect the  social media network to the already existing ‘disaster response network’ . The discussion was guided by a set of  questions; each table had a different set of questions(see the blog Emergency Social Data Summit for questions).  Our table came up with a very interesting idea for the question of what to do with the “emergency social data”(the red cross’ words , not mine) after it has been aggregated. Anyone remember the Ad Council? The group that’s responsible for public service announcements on TV and radio? Yes? No? Well, if you don’t that’s ok; I’d heard of them, but I didn’t know what they did until yesterday. Our group’s idea was to create a Social Media Ad Council, responsible for giving victims, professionals and everyone else accurate,  verified and up to date information about the disaster. There were many more speakers after that, but seeing as the ‘fun’ part of the conference was over, my father and I decided to leave.  You can participate in the ongoing conversation about the use of social media in emergencies on twitter, the red cross’ website,  the Emergency Social Data Summit blog and various other social media websites(see the red cross for more details).