How Do I Trust That my Hotel Isn't Infected with BedBugs: The Internet/Social Media 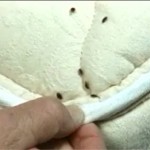 Business travel is getting worse every day.  There are fewer flights, more screaming kids on the plane, and less leg room.  I thought we had hit the bottom, but I was wrong.  Instead, business travel includes another perk — the resurgence of bed bugs.  Apparently New York City is filled with these horrible creatures.  They are in the hotels, the apartments, the movie theaters, and probably in the Nuts4Nuts stands.

Of course I have to travel to NYC occassionally for business.  This isn’t great, because the thought of bugs crawling around in my room will keep me up all night (I’m not really an enthusiastic camper).  Want a creepy fact about bed bugs?  They only have to eat once a year!  They also hide in your furniture.  These a patient, efficient monsters.

So what should I do?  I could refuse to travel and stop making money.  But then I’ll be homeless, which is fraught with many bug-filled nights.  Instead of taking a job in sterile lab, I turned to the Internet and found several blogs and websites that give you a heads up if there have been reports of bed bugs.  The best one is the Bed Bug Registry.

I know it’s commonplace to turn to the Internet to find information.  But this particular offline problem is ideally suited for the web/social media.  It has to be constantly updated and rumor is as valuable as fact.  I don’t care if there has been a conclusive determination of bed bug existence.  If there is a whiff of any type of bug sighting, I’m not going to that hotel.

Tags: Blog, Online Trust, trust
« The Magic of Metrics
Small Business & Entrepreneur Tips from Whitney Zimet of I Am The Maven »