It's Official, According to the NYT and the Army, Power Point is Destroying the World 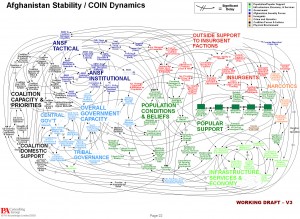 A month ago, I wrote a blog about how terrible Power Point was for business.  I was in a full Power Point stupor, trying to figure out how to make complicated concepts fit onto a colorful and sparse slide.  I sounded bitter and that took away from my credibility.

Now the New York Times has pointed out the dangers of Power Point in context of the war on terror.  I’ve linked to the article here(and a special thanks to my friend Michael C. for sending it to me).  The most disturbing point made is that the over-simplification of strategy to fit on a slide (and the overconfidence conveyed by these simplified slides) can mislead developers of war plans (including our invasion of Iraq and Afghanistan).  Think about this for a second…apparently a good deck will be able to sell you on a war strategy (or business strategy), but the better the deck, the more likely it will lead you to an untenable position.  That sounds about right.

Please continue to share your Power Point horror stories with us.