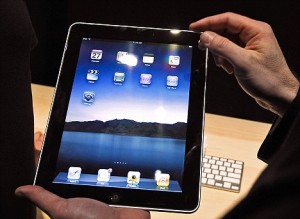 Let me just start by saying that I fully admit that I am a “gadget guy”.  I love having the latest gadget that can make my life easier and/or more efficient.  Let me also start by saying that I think that Apple is a great company that has made some innovations over the last decade that have single-handedly advanced technology and changed the way people live their lives.

Let me continue by saying that I believe that the newly released iPad from Apple will not be nearly as successful as the iPod, iPhone, iPod Touch, or even the iMac.  There is no place in my life for the iPad…believe me, I looked…I just do not have a need for a device of this size at this price with it’s current capabilities.  Everything that I can think of that I might want to do on the iPad I already do on either my smart phone or my laptop.  I would also argue that my smart phone or my laptop are more appropriately equipped to do those things as well.

If I wanted to send an email while I was on the train I would go straight to my smart phone…it is more compact and can connect to the Internet through a mobile hot spot or a cellular connection.  Why would I want an iPad to do this?  Not only does it only connect to the Internet through a wi-fi signal (unless you add a data plan from AT&T for a monthly cost) that I may not be able to get on the train, but it is also the size of a text book so I can’t hold it in my pocket.

If I wanted to work in Microsoft Excel I would use my laptop because the screen is larger and I can easily edit the spreadsheets using a full size keyboard and the processing power of the latest laptop chip set.  Why would I want an iPad to do this?  The screen is smaller so I would have to scroll all over to find things, I have to type out letters using a smaller touch screen keyboard, and the processing power isn’t that of my laptop.

Sorry Apple, I really tried but I just can’t legitimize throwing down $500 (and up) for the iPad just so I can read an eBook in color, assuming that I would even rather do this on the iPad than on the Kindle from Amazon that also already has received rave reviews, is $240 cheaper than the iPad, and is already readily used and supported in the eBook industry.  I hope all of you Apple supporters out there don’t hate me for saying these things…remember, Apple has had other minor failings in the last decade, the Apple TV player (iTV must have been taken) from a few years back comes to mind, so it isn’t unheard of.

Again, this is just one person’s opinion, let me know if you think I am wrong!

Leave a Reply to Dere