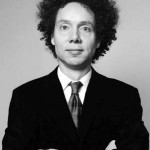 By nature, I’m a contrarian.  It could be that I just like to argue, but if the conventional wisdom is one way, I’m inclined to believe the opposite.  Since “Blink” and “Tipping Point” became the reference points for almost everyone in the business world, I started to heavily discount any theory or research posited by Malcom Gladwell.  The great thing about being a contrarian, you don’t even need to read the work or understand the position that you’re disagreeing with — you just take the opposite side.  So, of course, I had a very good handle on Mr. Gladwell’s work without actually reading it.  Unfortunately, my intentional ignorance didn’t last long.  As a reader of the The New Yorker, I kept coming across articles that I really enjoyed.  The problem: these articles were written by Malcom Gladwell.  When does this guys sleep?  He’s everywhere.  I wouldn’t be surprised if shows up on Sesame Street, explaining  supply side economics in a child-friendly way.

Why this long explanation?  Because I’ve completely abandoned by dim view of Mr. Gladwell, and repeat every single thing he writes as gospel.  I sicken myself.  Today will be no different.  In a recent New Yorker article, Malcom takes on the widely held belief that successful entrepreneurs are risk takers and mavericks.  In his view, that may be true for many entrepreneurs, it just isn’t so for successful ones.

Instead of being risk-takers, successful entrepreneurs are those with unique insight or information that see the value in something that others do not, and strike.  These individuals don’t risk their own money (or if they do, very little of it) and act more as predators than as free-wheeling mavericks.  He profiles Ted Turner and John Paulson to make these points.  And ends the with the results of a survey of individual business owners — where it establishes that this group is much more willing to settle for less monetary compensation so long as it is more certain.

So what’s your view?  Do you agree with Malcom, or are entrepreneurs risk takers?