Sealing the Deal (Part I of II): Ensuring Legitimacy

You Know You’re Not a Thief, But Do They?

By nature, people are cautious about who they associate with. As if this wasn’t enough, people become even more wary of others when in an online setting due to the lack of face-to-face interaction. Many people can be very extroverted in online settings such as Facebook and Twitter, but what about when they want to find a trustworthy business? This issue can make the seemingly simple task of promoting oneself very complicated. However, looking at this through the customer’s point-of-view, can we really blame them for being skeptical? Of course not. No one wants to do business with a complete stranger.

According to this alarming statistic, “90% of the users would leave your website within 5 minutes if they won’t find any kind of trust seal – especially if your business is unknown and new.” No business begins with popularity and definitely not with legitimacy. However, this issue of trust doesn’t mean game over. Instead, it is simply a break in communication that must be connected. To mend this break, those in new businesses must understand this: Although customers may be unnecessarily worried that your business can’t be trusted, you don’t necessarily have the credibility to refute such a claim. Because of this unfortunate fact, new businesses must make it a top priority to show customers that they are making safe and appropriate choices when paying for your products and services. This has brought about the need for online trust seals.

Why Use a Service Seal?

We all need help sometimes, and growing a business is no exception. That’s why a concept known as a service seal has quickly become so popular. Service seals, which function as trust seals for non-ecommerce websites, are useful because they show customers that a business has been impartially evaluated and deemed reliable by a third party.

We all enjoy seeing billboards that advertise various products and services, but many times we need more than a catchy slogan or an inspiring picture. When a business agrees to put a service seal on its website, it is making a powerful statement that says, “We have nothing to hide.” Such a statement provides assurance to customers and makes them feel safe. In fact, we have found that 86% of customers feel safer using a website that features a trust seal or similar mark of authenticity than one that doesn’t. Where establishing legitimacy through online networks has become a serious problem, many people have come to see service seals as a new and innovative solution. What do you think? What, if any, experience have you had in dealing with service seals and the websites that use them?

Identity Theft is at a Record High: What This Means in the World of Online Commerce 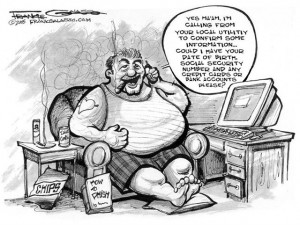 According to the Government Accountability Office, taxpayer identity theft has increased fivefold since 2008.  This has become an absolute nightmare for the IRS, especially its criminal investigations division, the division responsible for investigations of of identity theft.  However, even the IRS admits that they “pursue criminal investigations of suspected identity thieves in only a small number of cases.”  In other words, the majority of identity thieves are not prosecuted.  Identity thieves are faced with far too few obstacles and therefore, their crime rates will continue to rise.   And indeed they have risen: there were 248,357 incidents in the 2010 fiscal year, in comparison to the 51,702 in 2008.

The identity theft counts are more than just a mere statistic: these numbers make up a trend that affects more than tax returns.  The rise in identity theft rates mirrors that of other cybercrimes.  Online trust concerns are a direct result of the inability of security solutions in keeping up with rapidly developing technology.  The changing face of technology and cyber commerce make security much more complicated than the situation shown in the comic above.

Giving away any information at all online can pose a risk.  The recent Sony Network breach is proof that even larger, established companies can’t always protect customers’ information.  Personal information obtained from Sony included the names, addresses, email addresses, birthdays, PlayStation Network and Qriocity passwords and user names, and online user handles, of over 70 million customers.

Naturally, people have become more protective of their financial and personal information.   This poses unfortunate challenges for small businesses who are trying to make their mark in the seemingly endless web of the internet.  Customers are extremely reluctant to give away their personal information to lesser-known companies, and therefore, online businesses suffer.  In fact, more than 63 percent of shoppers leave transactions uncompleted because they are concerned about online security.  At an average of $109 in abandoned goods per transaction, online businesses lost $21 billion in the year 2008 alone.

Recent events make it even more imperative that small businesses, consumers, and the government all work together to create a safer shopping environment.  The practice of online commerce is here to stay, so we must all take steps to protect our own information and the information of our customers.  What are you doing to improve online trust concerns?

I saw this article the other day in Wired magazine and it reminded me of how important security is while shopping online even if you have additional measures in place to help protect your identity from being stolen.  The article basically details how LifeLock’s CEO, Todd Davis, may get the worst marketing move of the decade award for publishing his Social Security Number in the ads for their product and on highway billboards in order to prove that their product will keep online shopper’s identities secure.

Sure enough, 2 years later and his identity has been “stolen” an unbelievable 13 times!  To be fair, it sounds like his identity may not have been “stolen” necessarily but his Social Security Number was used to fraudulently open a bunch of cell phone accounts and then they went into collection when they were never paid on.  I think some additional research needs to be done here on these cell phone company’s account creation policies because if someone can just write a social security number and name down on a form that isn’t theirs and walk out of the store with a cell phone and active account that may be another issue.

So back to the CEO of LifeLock…I guess the two lessons here are obvious but big ones: 1) Never under any circumstances allow your Social Security Number to get in the wrong hands online or in a store as the consequences are dire.  2) Don’t use LifeLock.  Sorry, this may be a great product but I can’t put my faith in a company that has a CEO that is this dumb/cocky.

By the way, LifeLock also has a few pending legal matters in the courts since they also claimed that if anyone used their product and still had their identities stolen that they would give them $1 million.  Apparently a few people used Lifelock’s product and still had their identities stolen, but Lifelock doesn’t want to cough up the cash.  I guess all these consumers would have had to do in order to get the $1 million without any complaints from LifeLock would have been to publish their Social Security Numbers on a billboard!

The Internet Crime Complaint Center is a partnership between the National White Collar Crime Center and the Federal Bureau of Investigation (FBI) and is set up to receive complaints of crime on the internet. The Complaint Center is known as IC3 and annual issues a report notifying the public of trends that they see in complaints that they have received from the public about cybercrime.  IC3 received complaints across a wide spectrum of cybercrimes including online fraud, computer intrusions and hacking, theft of trade secrets, identity theft and international money laundering.  The 2009 Internet Crime Report was just published in mid-March 2010 and  here are some of the key findings:

2) More than a half billion dollars in monetary losses were reported in 2009 – $559.7 million – from cybercrime

4) Of those victims that reported monetary losses from the cybercrime, the mean dollar loss was $5,580 and the median was $575.

5) The vast majority of the complaints were made from the United States, but IC3 received complaints from victims in Canada, the UK, Australia and India.

6) The perpetrators in the United States tended to reside in the followings states: California, Florida, New York, the District of Columbia, Texas and Washington.  A number of perpetrators were also alleged to have been in the UK, Nigeria, Canada, Malaysia and Ghana.

What does all of this mean?  All of this reinforces that online shoppers must remain vigilant when they shop online.  Cybercrime is only increasing.  We have covered in previous posts 5 Steps for a Safe Online Shopping Experience.  Shoppers should familiarize yourself with these and other steps to keep you safe online.  The Ic3 also listed a good resource at www.lookstoogoodtobetrue.com that consumers can look to for consumer alerts, tips and fraud trends.  Separately, we have also given online sellers guidance as well on ways that merchants can build, demonstrate and increase trust for their website visitors so they can sell more.

We imagine cybercrime will only continue to grow and so we must be prepared to combat it by demanding transparency online and arming ourselves with information and safe shopping tactics so we do not become another victim.

Please tell us what you think of the 2009  Internet Crime Report and these statistics.