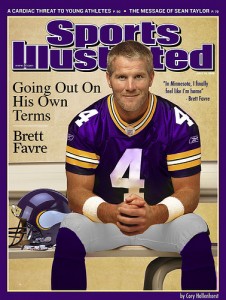 I may be starting something I shouldn’t with this post, as most of us on the KikScore team are ardent professional football fans (except Raj, who likes the Cleveland Browns).  The first 20 minutes of our Monday meetings are consumed with rehashing Sunday games (we get a lot more done during baseball season).  This year my favorite team, the Minnesota Vikings, signed Brett Favre and, in turn, they are having a great season.  So, to the disgust of Mike Collins (my business partner and Green Bay fan), I’m going to write what Business lessons can learn from the Brett Favre acquisition.

Everyone assumes that when you come out with a new product or service, it has to have immediate market success, as-is.  But as Nassim Nicholas Taleb makes clear in his book “The Black Swan”, one of the greatest strengths entrepreneurs have is the ability to tinker.  Tinkering with a concept until it suits the market is the whole point of business.  What’s the tie-in to Brett Favre?  Well, his first year in the NFL wasn’t notable.  He was a back-up quarterback for the Atlanta Falcons — and didn’t show any indications of being a future Hall of Famer that he is.  But over time, he changed his work-out methods, how he approached the game and now, at the age of 40, he’s having one of his best years ever (that’s after 20 years of tinkering).

Last year, the Vikings had almost every member of the current team.  They lost in the first-round of the playoffs.  Now, who knows how it will end this year, but this year’s team is much different than last year.  The biggest difference is Brett Favre — his experience and talent.  The business lesson is pretty obvious.  You can have all the supporting pieces, but talented leadership (or lack of it) can raise or sink the level of everyone else around him/her.

Somewhat related to patience, is the importance of experience/intelligence.  There are a lot of faster, younger players than Brett.  In fact, the Vikings have two younger/faster quarterbacks and they still chose to hire Mr. Favre at $14M/year.  When it comes to business, it may be tempting to promote the new HBS graduate — she knows all the cool Malcom Gladwell terminology and interned at some investment bank (that no longer exists).  But maybe you should look again at the company veteran, the one that knows your product and industry well.

This posting could go on and on…so out of interest of preserving my dignity, I’m going to now end my love-letter to Brett.  Feel free to send any jeers or life-sports lessons.