ThunderSnow! What Your Business Needs! 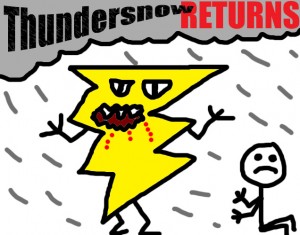 The past few weeks the U.S. as seen its fair share of Winter weather.  Last week D.C. shut down and KikScore co-founder, Raj, had to take refuge at a bar for several hours.  Not really sure how that is different from a normal day with perfect weather, but I digress.

But the biggest storm of the season was the blast this week.  20 inches of snow hit Chicago, but more importantly, so did“ThunderSnow!”  This is a combination of a snow storm and thunder.  It’s happened twice this year (that have been televised) and the Weather Channel is freaking out about it.  Why?  I have no idea.

Neither of these two things (snow or thunder) really are that exceptional.  It’s not like a hundred foot wave crest that sunk the Andrea Gail.  No, it’s just the combination of two ordinary things that rarely happened together.  Or if they do happen together, it’s not ordinarily captured on tape.

So, you have two common things, that may or may not happen concurrently.  I guess that’s exciting.  But what really is the sizzle is the name — ThunderSnow!  I think you have to include an exclamation point after you right that.  ThunderSnow! sounds like a  lame cartoon hero.  It sounds so much more awesome than it really is….sort of like the McRib (mmmm…McRibbbbbb).

That’s the beauty.  The name has you hooked.  The idea of ThunderSnow! is way better than the reality…sort of like my Toyota Prius…in traffic…in a snowstorm…or under ThunderSnow!  So, I guess my point to this (other than getting to write about the ThunderSnow!) is that you can have a decent, ordinary product, but if you market it correctly, or have the Weather Channel freak out about it, it can turn into a sensation.

Speaking of which, maybe we should change our name to KikSnow!!