The Real Housewives of Beverly Hills: The Reason I'm not Working on My Small Business Tonight 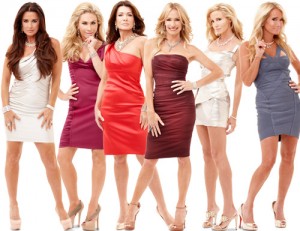 As a nights and weekend entrepreneur, every night I have a list of things I need to do to work on KikScore.  Usually I find the time.  But not on Thursdays.  Thursdays belong to Camille, Kyl, Lisa and Taylor — the ladies of RHOBH.  And I can’t be the only guy who thinks the same way.  In fact, there has been more than one drive home where I’ve talked about the show with Raj.

Now besides being a fascinating study of human (mis)behavior, there are some decent business lessons to be found (at least that’s what I tell my partners so they don’t get made at me).  Here’s a start at what they are:

1.  Own Up to Your Mistakes:  We all know that Taylor talked trash about Kyl to Camille early on in the series.  Ever since, Taylor has been denying it and losing face every day.  Your customers know when you screw up, so instead of making excuses, just own up to it (you’ll be better off in the long run).

2.  Publicity May Not Always Be the Best Thing:  So you’re married to Kelsey Grammer and you want to establish you’re own identity.  Signing up for the RHOBH make sense.  But then it blows up.  Soon the whole world finds out that you’re a dim, manipulative harpy, whose only friends are on her payroll.  Maybe you don’t seek out publicity for your business, and only hope for attention for positive reasons (not because you’re desperate for it).

3.  Don’t listen to Mediums (or Larges).  During a memorable dinner party, Camille brought along her novelty friend, who was the inspiration for the show “Medium” (now cancelled).  In not a surprise twist, Camille’s friend started predicting all sorts of bad things for Camille’s frenemies.  She clearly saw that Kyl’s husband was going to cheat on her.  What the medium missed was the fact that Kelsey was, at that exact time, in NYC cheating on Camille.  Kind of a big miss.  So don’t believe mediums or proformas.

That’s the best I can do…i’ve no got to watch the show.