The turtle and the hare-revised! A cyber security fable

Hello, everyone! How is your week going? Any of you SIS-U folks reading this? Yes? Great! Hi there!*waves* So,you’ve all heard about security problems on the internet and are probably going to click away from this post because you think it’ll rehash what has already been said. Well…you’re partly right, but only because it deserves rehashing, and you’re partly wrong. Did any other blog post give you the lesson in fable form? Yes? (Really? Where?). It all started when I read this post about experts urging people to ‘Stop. Think. Connect.’ I saw the word stop and immediately thought of turtles. [I think I had my university mascot on the brain.] Turtles move through life slowly, which is how we should move through the internet. (I wonder what this says about my university then)So, then I thought about updating the old turtle and hare fable for the modern internet age.(This fable dates back to the days when there was no copyright.)Everyone know how the original story went? Yes? Good for you, but you have to suspend that little bit of knowledge because this update is completely different!(Disclaimer: I did not reread the original version before I wrote this and it has been a while since I read the original) On to the story!

Once upon a time(all good stories start out this way) there was a large(very large) kingdom called Cybertopia (fanfare). Since this kingdom was very big, it was besieged by a vicious army of bots, viruses and malware out to steal it’s citizens identity and wealth.(cue the danger music)[from now on referred to as the BVM]{this would be easier if WordPress had a footnote button} Since Cybertopia’s citizens kept falling for the BVM’s tricks, the Cybertopian police decided to train a special division to educate the citizens about the BVM.(cue happy music!) Two of the most promising officers of the new division were  Rabbit and  Turtle. Today was the day of their obstacle course.

“All right recruits! The BVM has it in fer ya. They’ll set up traps, like the ones in this here obstacle course and it’s your job not to fall for them,” Sargent Monkey yelled.

“Alright,” St. Monkey took out a list, ” the first one up is recruit number 55. Rabbit, yer up!” Rabbit stood on the starting line and waited for the signal. (ready, set, go!) Once he heard it, he was off and running. Rabbit raced through the obstacle course easily. He ignored the ads, dodged the bot’s lasers and smashed through the malware puzzles as if they were tissue paper. Rabbit was nearing the end of the course when he saw this billboard: 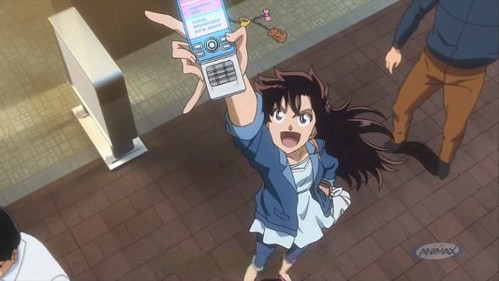 I Finally got a signal on the AT&T Network!!!!Click here to find out how I did it!

Wow,Rabbit thought, I should check that out! I have AT&T and I never get a signal! So Rabbit touched the billboard. Immediately a wormhole opened up, sucked Rabbit in and deposited him near St. Monkey.

“You fail,” St.Monkey hollered, “since you were in a rush, you failed to notice the trap! You’re going to have to take this course again! Turtle, yer up.” Unlike Rabbit, Turtle took the obstacle course very slowly. He ignored the ads, was too slow for the bot’s lasers to hit him and made the malware puzzles explode out of sheer frustration.  Turtle was the nearing the end of the course, when another ad popped up. Turtle looked at it for a few seconds, then shook his head and moved on.

“Congratulations,” St. Monkey said, ” because you took things nice and slow, you avoided the traps. You pass the course!” So, Turtle got his badge, while Rabbit had to retake the course. The moral of this story, slow down when you are on the web. Things that may look tempting, may harm you.

If you can guess the show this picture is from( the logo on the bottom right gives you a hint) you get a landscape drawn by me! You can request scenes of course( as long as they don’t involve people or too complicated to draw animals, because I cannot draw them) and I will try my best to draw it the way you want it.