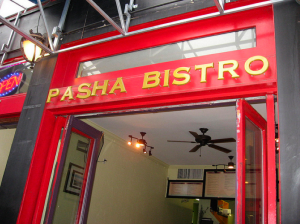 This is a story about one of my my family’s favorite neighborhood restaurants and what they have done to respond when the competition has literally moved right next door.  My wife and I love middle eastern food. I could easily live on a meal plan of  hummus, lamb kabobs, donner platters and falafel for lunch and dinner…..yes, call me crazy but I really like good middle eastern food.  So one of our favorite restaurants is called Pasha Bistro and is literally right down the street from our house (and one of KikScore’s offices!).  So my wife and I either make the trek over there or order out from Pasha Bistro almost once a week.  And we are not the only ones.  We have close friends in the neighborhood who also love Pasha Bistro too.  So much so, that on a recent night out at a spring bbq, a number of the attendees spent way too much time talking about what were our favorite menu items and even discussing a comparison on Pasha’s fantastic and extra garlicy hummus versus other more watered down hummus from lesser take out places (Mike, yes, that includes Lebanese Taverna the place he drags us all each time he is in DC- by the way for anyone with real taste buds and not from Fargo, Pasha is so much better than that Taverna!).  Bottom line, if you are in DC and especially in Dupont Circle, check Pasha Bistro out you will not regret it.

So what’s the point to this story?  Well the big talk in the neighborhood this summer in DC has been, Did you see who moved right next door to Pasha Bistro? Well that formerly empty location next door to Pasha Bistro was only known to me as the nasty bar where I had to watch the Red Sox complete their inevitable come back from a 3-1 series deficit in 2007 and beat my Cleveland Indians to advance to the World Series. It is now a brand new Mediterranean restaurant called Agora.  Take that Pasha Bistro the owners of Agora must have thought when they opened up in newly renovated digs, right next door.  The two restaurants are so close that a diner eating on the patio at Pasha can literally reach over a small patio fence that separates the two restaurant’s respective patios and swipe his bread in the hummus dish of a customer at Agora.

So when you were the only Middle Eastern restaurant on the block (17th Street) for years and build up a large and loyal following, what did Pasha Bistro do in response to Agora’s arrival right next door?  Well all of us small businesses and startups can take a lesson from what Pasha Bistro did to fight back against Agora over the last few months since its opening:

1) Beat them with customer service – So Pasha Bistro typically has good customer service when we eat there or order take out from the restaurant.  But when we visited Pasha after the “new neighbor” arrived, the service was amazing.  Every little item related to our dining experience seemed like it was focused on by the wait staff at Pasha.  They greeted us even more warmly then ever, they fawned over us before, during and after dinner and they truly looked after us.  The Pasha Bistro staff clearly went the extra mile and made that dinner out even more enjoyable that on previous occasions by being just so amazingly customer focused.

2) Emphasize your strengths – So when the competition moved in, it was almost like Pasha said lets ignore those Turkish invaders on 17th Street.  Pasha did not get distracted by trying to introduce new food dishes and entrees to compete.  Instead, Pasha cooked the same food the same way and the dishes remained first rate, the customer service (which was already a highlight) only got better and Pasha focused on one main ingredient, keeping their customers happy.  These were (and are) Pasha’s strengths and what the ownership did was played to those strengths every day at dinner when new and returning customers came to dine. 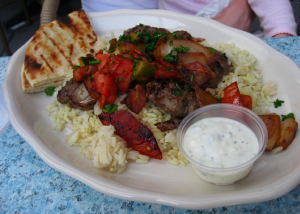 3)  Focused on your target market – The invading restaurant clearly was pushing more of an “upscale” dining experience that even included a chef standing outside decked out in a head to toe white chefs outfit with that funny hat. It would have been easy for Pasha to abandon their target market and try to go after the more “upscale” diners.  Instead, Pasha remained loyal to serving their target market of casual middle eastern dining.  There was no white table cloths or stuffy waiters – Pasha just said keep it casual and keep it good – real good. 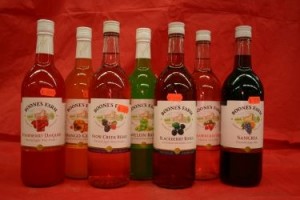 4) Create unique offerings that keep your loyal customers happy – Following up on the last point, Pasha actually said from a strategic perspective what can we do to further solidify our customer base?  Pasha created a great, every day special that appeals to all diners (that especially like to have a drink with dinner!) and that is an $18 special for any bottle of wine, any day of the week including weekends.  And no, Pasha did not fill their wine list with Boone’s Farm or Mad Dog and try to sell that for $18.  They largely kept their same wine list with good wines and applied this great discounted offering for any dinner.  With this new deal, they got my wife and I hooked and a bunch of my other friends in the neighborhood too.  The $18 a bottle wine offer was a great competitive response by Pasha Cafe to Agora that allowed Pasha to lock in their customers and give us something new to keep bringing us all back.

5) Do not freak out when the competition moves in – From all of this, the one thing is clear and admirable: Pasha Bistro did not freak out when Agora moved in next door. They could have and in many instances you hear of small businesses and startups that freak out when they get a little competition.  The learning from here from Pasha’s experience is they took a deep breathe and said lets go on the offensive, but lets also be smart, targeted and tactical about going on the offensive against Agora.  That is the key here, Pasha mounted a competitive response to the new entry and now Pasha just needs to sit back and keep executing on their response to Agora.

What do you think about Pasha Bistro’s response to Agora?  Please tell us your stories of responding to a competitor moving next door.