What does Online Trust & Lebron James' Free Agency Have In Common? 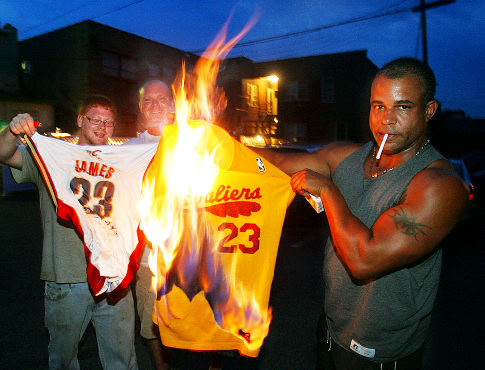 I am still frankly in some ways recovering from what I knew was going to happen all along.  Lebron James was going to leave Cleveland. I actually predicted it in this post about lessons small businesses and startups can learn from Lebron James after his flame out in Game 5 of the Celtics/Cavs series earlier this year.

So his departure got me thinking about a few things.  As we all know, his departure was a complete PR spectacle.  But there are some serious lessons learned.  Even strangely  I see some commonalities between how we all viewed Lebron James (especially Cavs fans) and how we decide whether we should trust someone online.

1.   People Change – Cavs fans, and frankly many in the media, thought they knew Lebron. Heck there was probably good reason for the belief, they watched him grow up in my hometown of Akron, watched him get drafted and become a global icon in Cleveland.  Many people thought that they knew Lebron to be “one of us” because he was from Ohio and knew the long frustration of Cleveland sports fans.  Boy were they (we?) wrong. Many people say something changed with Lebron in the last few months, even reporters that have covered Lebron since he was 16 and back in high school. It started with the complete collapse in Game 5 against the Celtics where he looked clueless and uninterested in playing in front of 20,000 crazed fans in a series that they should have won. And it continued to this summer where Lebron blew off the owner of the Cavs not responding to one of the owner’s calls or voicemails.  Wow, did he indeed change and change at that very quickly!

Lesson Learned: You may think you know someone online (and maybe even offline), but you need to be prepared for the unexpected. The only thing you can do to protect yourself is a) get as much information as possible about a person and business and b) always be cautious for the unexpected to happen because it will.  Also the person or business you know one day may be very different a few months or years later.  So always keep your information gathering up to date before you decide to do business online.

2. Do Not Trust Labels, Trust Actions – Lebron repeatedly said so many times he puts a premium on loyalty.  He said he is a loyal guy and that he will always be that kid from Akron.  The fans, media and even his teammates bought into that card.  Heck, I even bought into it.  You have to kind of grow up in Akron to understand it but there generally is a common bond of many people from NE Ohio that ties us together for some of the events, sports nightmares and generally ribbing we have endured.  Again, we were so wrong. You can literally have the word “Loyalty” printed on your chest like Lebron does, but it means ZERO if you do not live up to your word.

Lesson Learned: When you are online, people and businesses will say all sorts of things to get your business. They will say that they guarantee certain things, that you can trust them, that their website is safe.  Make them prove it to you by having them show you their trackrecord of reliability, trustworthiness and success.  Heck, that is what the KikScore seal allows you to do as a small business.

3. Look for Hints of Information to be Wary:  So in some ways I can say myself and the rest of the city of Cleveland/Akron feel blindsided.  But that would be naive.  There were many hints of information and actions, though small and isolated instances, that should have made people wary of what Lebron was going to do.  There was the lack of commitment to the team last year when he had the opportunity to resign, there was his space cadet look and play in game 5 of the Celtics game, there was the lack of engagement with the team after the season and then maybe the most glaring one is when Lebron constantly referred to the fact that he needed to consult “his team” for the decision.  No that would not be his Cavs teammates, that was his marketing team and his bunch of his fellow St. Vincent, St. Mary high school friends and agents. I should have known, I went to Walsh Jesuit the arch rival of St. V’s. We could never trust those guys……but that goes back nearly 20 years now.

Lesson Learned: Transparency is key.  If a person or business is transparent and gives you information about themselves and their actions, first that is a good sign because they are comfortable enough to give you that information.  But more importantly, in order for you to make that online trust decision you need to analyze that information in way that allows you to feel comfortable.  To help, here are 7 items to look for from in stores that sell online to make sure they are legitimate,  5 safe online shopping tips and some help with finding contractors you can trust online.

There probably are many more.  Please let us know which ones you think there are.  I am sure you probably heard that the Cavs owner last night had a nuclear response to Lebron breaking his trust and the city of Cleveland’s trust.  We all should learn a few things from this free agency experience so that we do not end up having to send a letter like that to a person or company you do business with online because you did not take the steps to protect yourself.